“I tried so hard and got so far, but in the end It doesn’t even matter; I had to fall to lose it all, but in the end It doesn’t even matter” –Linkin Park  “I wanna run through the halls of my high school; I wanna scream at the top of my lungs; I just found out there’s no such thing as the real world; Just a lie you’ve got to rise above” -John Mayer  “It is meaningless that we are born, it is meaningless that we die.” -Jean Paul Sartre  “The person who regards his own life and that of his fellow creatures as meaningless is not merely unhappy, but hardly fit for life.” -Albert Einstein  “Cheshire Cat,” she began, rather timidly… “would you tell me, please, which way I ought to go from here?”  “That depends a good deal on where you want to get to,” said the cat. “I don’t much care where…”  said Alice. “Then it doesn’t matter which way you go,” said the Cat. Alice in Wonderland

Have you ever tried to give directions to someone who didn’t know where they were, or had what seemed to be no sense of direction at all? It’s craziness and can be rather frustrating for both parties. This almost happened to me the other day as I was handed the phone by a co-worker who said, “Here… can you give these people directions, they don’t know where they are.” I said to my friend a bit sarcastically “If they don’t know where they are, how can I help them?” Luckily, they did know the closest cross streets and I was able to guide them along. Fortunately, they had a foundation of knowledge to build upon so they and I could know at least where to get started. This is a bit overstated because even if people’s feet are planted firmly in mid-air (by holding to contradictory and incoherent worldviews), does not necessarily mean they can not be helped to see their lack of foundation and ultimately put there feet on solid ground. This would only be possible, however, if there is truly solid ground to stand upon. I hope to spend a few posts reflecting on worldview basics and demonstrating the foundation. Indeed, their is and must be a foundation for us to even begin our growth in understanding. Otherwise, what a waste of time! May you be encouraged in your search for truth and meaning!

What is a worldview?

A worldview is a conceptual structure or system of thought through which everything is given meaning and context. Everyone, though they might not admit it, has a worldview. A worldview is in someways like a pair of glasses that we look through to give meaning and coherence to our experience. One way to determine our worldview is to ask questions: About origins- Where did the universe come from or has it always been here? How did humans get here? About meaning- Why are we hear? What is the purpose of my life? About God- Do I believe in a God or gods? What is that God or those gods like? About destiny- What happens to people when they die?  Where is the world headed in the future? About morality- How “ought” we live? What kind of actions are right or wrong? Do I believe in truth, justice, absolutes? Why is their evil in the world? What is the “solution” for evil and suffering? About identity- Who am I? Who are you? These are the kinds of questions that, when answered, provide insight into the kind of worldview one holds.

As I mentioned, every person has a worldview, and every worldview can be broken down into three main categories: Theism, Naturalism, or Monism (Transcendentalism). Theists– think that there is a personal cause of the universe that is beyond the universe. Naturalists- deny the existence of any supernatural and claim that the natural world is all that exists. Monists are those who believe that all of reality is one. Pantheism is a form of transcendentalism and posits that God is everything that exists. A caveat I would make is that, a peron’s worldview (especially in our post-modern culture) is often inconsistent and contradictory within their own system. Thus, they could be categorized as relativists. These people have their feet planted firmly in mid-air because their answers to the above questions fall under more than one worldview category simultaneously. However, naturalists and monists have worldvies that are inherently relativitic. Although the theistic worldview is not inherently relativistic, there are unfortunately so-called theists who are. 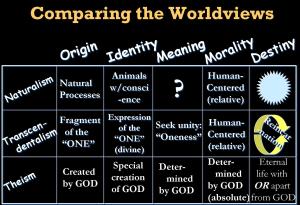 This chart is a visual comparison of the three main wordviews. Throughout the next few posts, we will be diving a litter further into worldview basics.  Next time, I hope to break down each worldview into a little more detail and discuss the formation and selection of a worldview.

Until next time consider the words of GK Chesterton who said,  “The modern habit of saying, ‘This is my opinion, but  I may be wrong,’ is entirely irrational.  If I say that it may be wrong, I say that it is not my opinion.  The modern habit of saying, ‘Every man has a different philosophy; this is my philosophy and it suits me:’ the habit of saying this is mere weakmindedness…A cosmic philosophy is not constructed to fit a man; a cosmic philosophy is constructed to fit a cosmos.  A man can no more possess a private religion than he can possess a private sun and moon.”

One thought on “Worldview Basics (Part 1)”

We destroy arguments and every lofty opinion raised against the knowledge of God, and take every thought captive to obey Christ. 2 Cor. 10:5

“Christian apologetics involves the presentation and defense of Christianity as an integrated worldview that is objectively, universally, and absolutely true, reasonable, knowable, and existentially pertinent to both individuals and entire cultures. Apologetics involves rebutting unbelieving accusations against Christianity (2 Corinthians 10:3-5; Jude 3) as well as giving a constructive and persuasive case for Christian theism (Philippians 1:7; 1 Peter 3:15).” -Douglas Groothuis, Ph.D